This week in my studio, I decided to give my red clay body another chance. Throwing small vessels with this body proved difficult because of its plasticity. I then hypothesized that maybe if I used a larger amount to throw with, it would be easier to handle, and this was correct. I threw three bowls that were the biggest I have ever thrown, and my goal is to be able to throw with 10 pounds by the end of the semester. I really enjoyed the forms that I was able to create.

I also decided that to throw these large bowls, a batt was just not going to cut it. In the past when I have used one to throw a lot of clay, it ended up coming off when I attempted to center. My solution was to take the pins off of my wheel head and just throw directly on it, and the change was very helpful. I decided to keep the pins and wing nuts in a mug that Charlie left behind for whoever wanted to take it, for good luck with my new passion of throwing Giant Things. 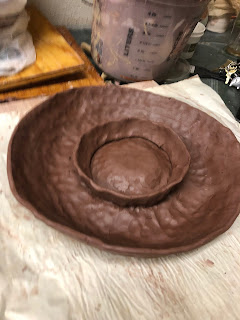 Posted by ClayInkGraphite at 10:35 PM No comments:

This week, I moved into my own studio! Upon my acceptance into the BFA Ceramics program, I was given my own space to make work until my graduation from IUS. I got more space than I expected, and I spent the whole week gathering more supplies that I found I would need for the space. I got the corner studio in what we call the annex, and so far I can say that I am totally in love with it. The most exciting change for me so far is that I don't have to throw "in public," and my train of concentration is much stronger in a smaller, nearly enclosed space.

I also discovered that I disliked the clay I made at the end of last semester, and was lucky enough to have been sent some clay to reclaim from Jason Burnett, whom I assisted in his studio over the summer. I made the clay body usable as soon as I got the chance to. It is a beautiful "blonde" in its green state and fires to a warm brown color.

I did however use the clay that I had available, and ended up really enjoying the warm color on my hands when I touched this clay body. I have not yet fired any of it and I am hoping that the mugs for this first assignment survive the kiln. 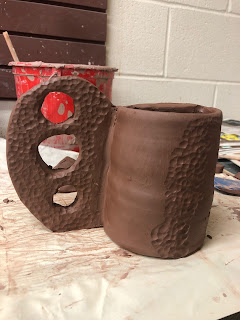 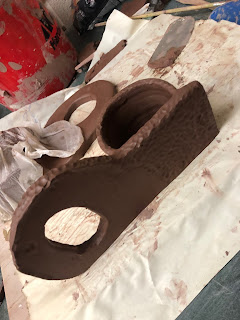 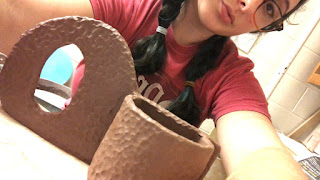 Posted by ClayInkGraphite at 10:19 PM No comments: